Just saying I visited Croatia wouldn’t do it justice, so I think instead I will just refer to it as šljivovica from now on. Of course there are a few more things to report than just me being drunk at 4 pm in the afternoon. Remote places by the river, old castles and the cradle of the mosquitoes for whole eastern Europe are just a few of the things.

After crossing from Slovenia into Croatia I found my sleeping place just a few kilometers after the border. It was about 2km away from the main road, which meant 2km of dirtroad through the brush. After I arrived at my sleeping place I was glad that I skipped on the painting job for the bus before I left, otherwise I probably would have been crying my eyes out. The place was really wonderful, not street noise, right on the river bank 100m from the water. So first things first, get a chair, get a book – chill. After I watched a wonderful sunset I went to sleep to the sound of sweet, nothing. I heard a few stories about people getting in trouble with the police even at the most remote places, but I guess the police didn’t feel like ruining their paintjob :) I decided to move on to the close by city the next day. So I gathered all my stuff, stored everything away turned the key of the ignition… and nothing happened. I already had some trouble starting the car the last few days but I could always give it a boost with the second battery. Not so this time. So I got everything out of the back (Bed, pillows, blanket, chairs…) and switched the batteries. Now I just have to replace the broken one (I use it for the solar panels just as a buffer now) at some point along the way and I’ll be fine. Lucky me, just imagine if I’d had to stay in that paradise like place any longer…

After this I did a few more kilometers than usual just because there where no highlights along the route I’ve chosen. Some of the bigger towns I passed through had a little Soviet Union touch to them. When I passed them I always had that dramatic russian men choir hymn in my head you always hear in the movies when they show stereotype epic russian stuff. :) I got to my randomly chosen next stop which was next to a lake outside of a small town. It turned out to be actually a natural swimming pool that was still under construction. This meant nobody was there when I got there and there was an abundance of parking space. So the place was quite nice and I enjoyed parking there until the construction started at around 7:00 the next day, there is always a price you pay I guess. I went on a bike tour along the nearby creek and cleaned myself up a bit. The night before when I arrived I saw some signs about a castle just up the hill. So I took a little hike and was rewarded with the ruins of an really awesome old castle all for myself. So I climbed and crawled all over the place, it was really amazing since it was not one of this tourist trap neat and tidy castles but the real deal. I could really feel the history there. (I put some more pictures at the end) 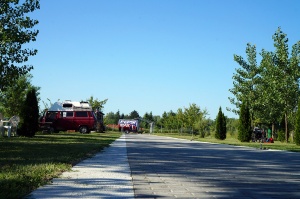 My next stop was the Kopacki rit national park at the north eastern border of Croatia. I found a little campground just outside the national park called Family Camp Kopacevo (45.599151, 18.784378). As I pulled into the driveway next to the check-in, I found Bela, his daughter and some friends sitting at the table. After the initial question; how much (8,5€) and how long I learned two new words: pivo and šljivovica (plum Schnaps). The car was still sitting in the driveway with the engine running at this point! :) For the next few hours I was sitting together with them chatting (in German, English, Croatian and Hungarian), laughing and drinking. Even though they were understanding me quite good, they never got the meaning of “No, Thank you, I had enough!”. So as the sun started to set I finally removed my car from the check-in driveway where it was still standing and drove to a camping spot, couldn’t have driven anywhere else anyway anymore. Later I was invited for dinner because Belas daughter was leaving to work for the summer in Italy. After some more to drink and good food I slept really well that night. The next morning I had some breakfast and went over to the social area again. 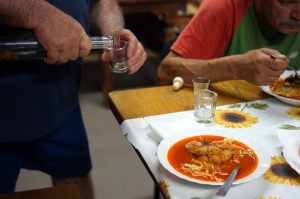 I had it a couple of times already that after I greeted people in croatian I get hit with a wall of croatian, so I guess my German accent is not showing too much. I always try and tell them “Sorry, only English!” which usually gets me a nod of understanding and then they continue talking in croatian to me.

Later that day I went on my planned bike tour into the national park. I was quite impressed with the amount of birds in the area and glad to see that there is a great deal of protection and preservation going on in the area. When I came back later in the afternoon the campcrew was preparing a paprika-tomato-fish stew (I forgot the name) which they invited me to join them for. I tried a polite no thank you since I didn’t want to take advantage of their hospitality. In return they just ignored it, put a plate on the table and poured me some pivo and schnaps. Even though it was a little harder to communicate because they spoke really little English it was a fun evening. That night I learned the downside of living next to a protected nature park where they have lots of swamp and water. Mosquitoes! Enough to make you faint from blood-loss if you don’t use repellent. Still good times!

I intended to leave the next day to proceed to Serbia to meet with Alexandra which I contacted trough warmshowers to go on a bike tour together. I got invited again by Bela to sit with them for dinner that night. I have to say I’m deeply impressed with the friendliness everybody is expressing towards me. Maybe they feel sorry for me because I live in an old car :) That afternoon a few more people arrived on the campground, two of them where Rolf and Anna, a couple cycling from Austria. We talked about our plans and arranged to meet again in Romania to cycle together for a little bit. So now I’m in a little hurry, since they cycle further than I drive every day :)

The next morning I left the campground to head for Serbia. I stayed on the campground for 3 nights, I planned to stay for 1. I thought the place was called family camping because they are family friendly, but I’d say it’s rather because they make you feel like family! 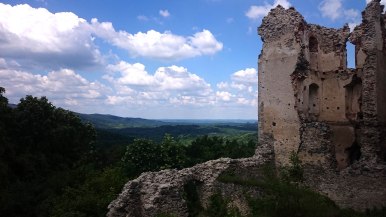 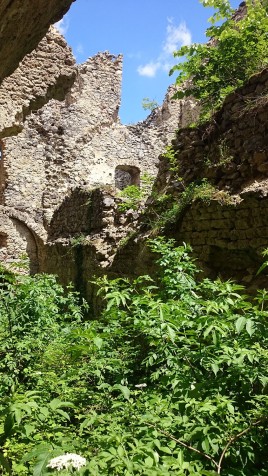