Macedonia was another one of the countries I didn’t consider for visiting on this trip. So entering the country not being biased by any prior research I was more than pleasantly surprised. The people and the sights Macedonia has to offer turned it into another of my favorite countries of this trip.

I entered from the east to first visit Delcevo and stay there overnight to make further plans. I already started to search for people on couchsurfing to meet in Skopje to explore the city together. But first things first, as the priority with every new country has been, get a Simcard, get money, get food. So I went to a small phone store to buy a Lyca Simcard, the folks at the store where my first encounter with anybody local and they went out of their way to help me. As it is required to have an address in Macedonia if you buy a simcard, they just entered their shop address, set up the card, activated everything for me and gave it to me free of charge even telling me where to go to charge it. Making exactly zero money but giving me awesome support. Great start! So after that I went to have a pizza. Yes, local cuisine ;) As with every trip I made so far, I found out that pizza is the thing I miss most foodwise after a while, because I can’t make any in the bus myself. Paying about 2€ for it I went exploring a bit and found out what is the best way to blend in with the local crowd in the evening… buy a bag of popcorn and stroll up and down the riverside. Before leaving the next day I thought I was in need of a haircut for quite some time now, I discovered a small shop with a guy who looke like her should have retired 20 years ago, well, if it goes wrong I can still wear a hat. Not being able to tell him what I want him to do I sat down in the chair and hoped for the best. The result was…. adventurous. He only asked for 1€ for the haircut, I gave him 2€ and he was so happy that I gladly forgot what I have just seen in the mirror looking at myself.

My next stop was Mladost lake for overnighting there. The journey was now all that exciting, the eastern part of Macedonia I travelled through was really empty and not really spectacular at all. In Delcevo I already saw that there is the weight of the meal you order next to it on the menu. I was expecting an average sized burger when I ordered the 200g item from the menu of the restaurant. When the waiter came back with my order, I was happy I ordered some fries with it. I got 200g of just hamburger meat on an empty plate. 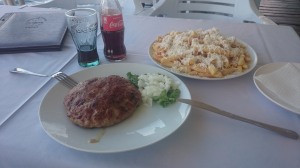 So keep in mind, you get what you order, no more, no less :D The roadside picknick area I spent the night was a horrible trash mess. It looked more like a dump than a rest area. In the evening the weather was a bit more windy and even more trash was blown out of the trashcans in the area. After a short swim in the lake that morning I went on to drive to Skopje.

In Skopje I went to a place that was marked for free overnight parking in my park4night app. Upon arriving I found the situation confusing with signs saying you have to pay for parking by SMS but only on the other side and further down the road. I asked the guy parked next to me if I this was a parking zone or not. He explained it to me and said the paid parking will start further down the road only. Well, if the locals say so. I took my bike and went to the downtown area to meet with Ana from couchsurfing who was going to show me around town. We where both on bikes, so the exploring of the town was swift and fun. 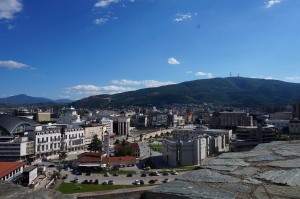 Even though she kept saying she doesn’t really know anything about the city she could explain everything I asked and took me to all the amazing cool places I would have never found myself. This included some of the best fries I had in a long, long time!

Later the day I wanted to go to check on my car since the Bulgaria incident I was a bit more sensitive on the topic. So coming back to the van I discovered … a parking ticket (Issued 5 min after I left the car!!). I have to say, it is not cheap to get a ticket in Skopje, I could have went out to for a good dinner together with Ana for that money! The guy next to me that told me I don’t need to pay for parking did get a ticket, too. The next car down the road not… because he had a piece of paper, which had “I work here” scribbled on it. So I guess that how things work here. Ana was about as mad about this as I was because as a tourist there is no way to pay for parking! You need a Macedonian phone number so sent a SMS to the system (my SIM is always data only), there are no machines to pay anywhere and the people to pay to, seem to hide until you leave you car so they can write you a ticket. After calling some people and asking around we came to the conclusion that it would be better for me to pay the ticket if I want to visit Macedonia again. We went to find a machine where you can pay for parking/ pay for parking tickets about 200m away in a different side road. The people from the private parking company where hanging out at the machine as well. They gladly explained to me how to pay for the fine. When I told them that the system is not working for visitors and how mad I was about that, they didn’t seem to care much. Even when Ana explained it to them that this is bad for tourism they made no attempt of even saying they might think about changing something.

Even though I got the parking ticket I still like Skopje and decided to stay a bit longer. That night Ana was busy so I went to stroll around the city and found a open air cinema in the park. Due to my superior knowledge of the Macedonian language I really enjoyed the movie, about a snow monster I guess? :) The next time I meet with Ana she brought some of her friends along and we went to Matka Canyon, which is just outside the city limits and I was really surprised by its beauty. 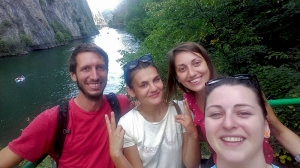 After a great day at the canyon Ana invited me to come to her place so I can see how people live in Macedonia … and to have a shower (which I desperately needed). I found out that I was actually parked just 100m away from her home :D when I got to know her mother and father I was once again drowned in hospitality and overwhelming friendliness. When it comes to food and hospitality, “No” is just not an acceptable reply from me.

They even went so far in putting out a new shirt and shorts to wear for me. At night we went out together to explore the nightlife of the city, again, smiling happy and friendly people everywhere, we went to different places and ended up in a small beachclub by the river which was empty but had some okay music playing. Once inside we saw that there was a live DJ playing music who really seemed to enjoy his job even though there where maybe 10 other people. After a few minutes it dawned on us, the DJ was blind! Now I was deeply impressed by the way he was doing his job but felt sorry that there were only so few people around.

After spending 4 nights instead of one in Skopje it was time to say goodbye and head out towards Albania. On that morning we went to have breakfast-Goodbye ice cream (best I had since Ljubljana, Slovenia) and went by mother Teresa’s birthplace. I spent the next night next to the Mavrovo lake close to the western border of Macedonia. I was surprised by the beautiful scenery in the area, since so far the nature hasn’t been that beautiful. Leaving the country through this area made one thing even more clear than before: Macedonia, I’ll be back! 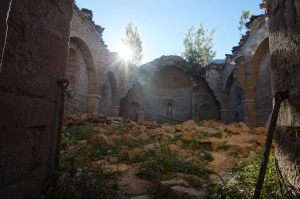 My spirits soaring I entered Albania, highly recommended by everybody who has been there and the place where I was going to meet up with Ekatherina again (the Russian CS girl I meet in Bulgaria) and get to meet her friend Ela.

One thought on “Macedonia”