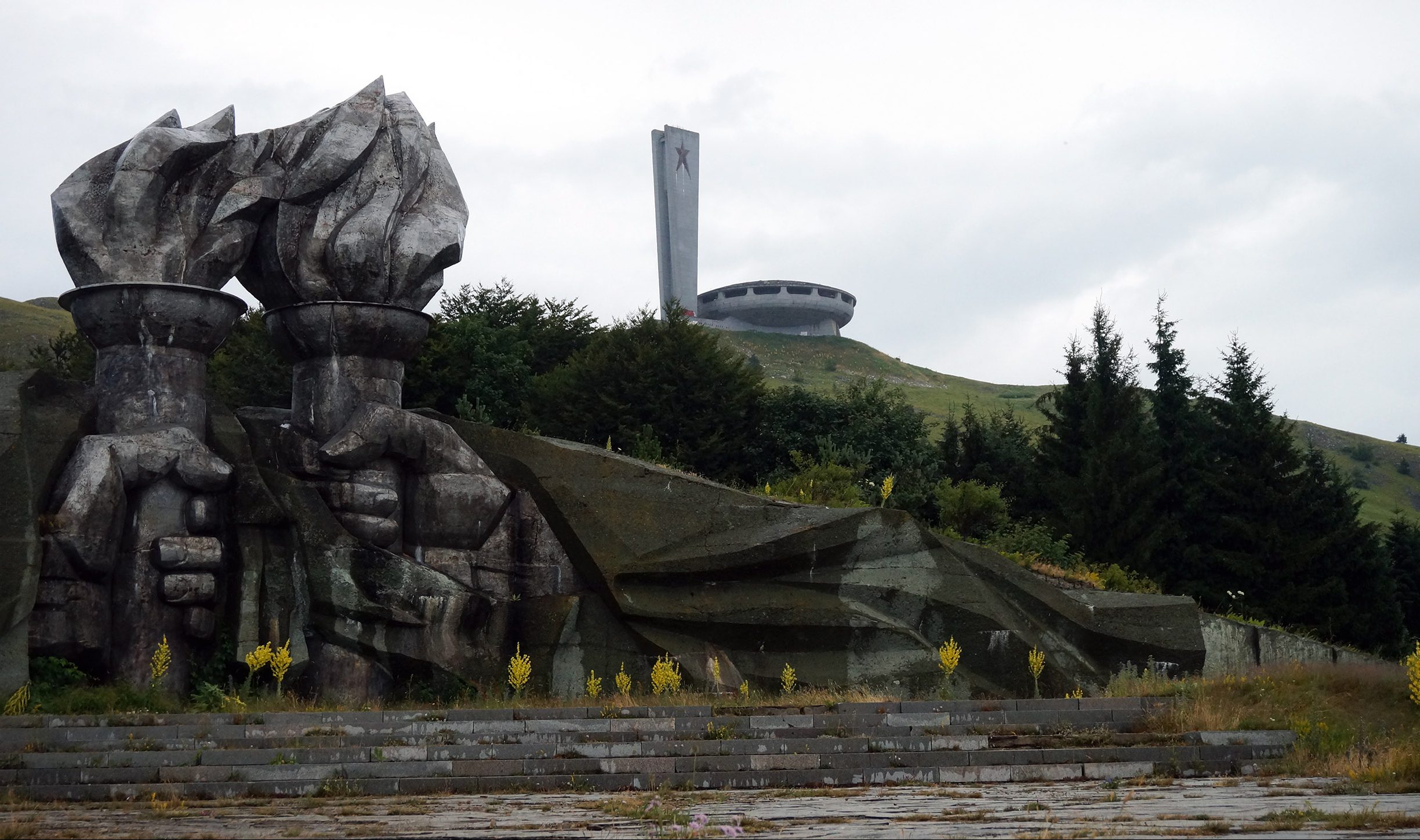 A big part of traveling is dealing with prejudices against people, places and countries. As for Bulgaria I was warned by almost everybody to not go there. One guy from Turkey told me he won’t even stop to get gas there. I was just about to tell everybody how wrong they are… but let’s have some communism first.

The communist UFO, yes, you can google that, it really exists. They will try to tell you that it was only a meeting place for the communist party up in the mountains, it’s a conspiracy don’t believe them :)

When I arrived the evening before it was raining like crazy, water was running down the mountain road in small rivers. I wanted to visit one monument along the way, but I was completely soaked just in seconds after stepping outside. So I proceeded right up to Chadschi Dimitar (the UFO) and found a nice place within sight of it to park for the night (42.73794, 25404109) The place was recommended to me by Jonas in Romania who showed me some amazing pictures of the inside (link) Getting up at sunrise the next morning to avoid any tourists and have some good light I looked outside the window and saw fog, wind and rain. Still I packed my camera and flashlight and went up to the place. Even though weather was far from nice the atmosphere was amazing, all of a sudden the building is visible in the fog, towering on top of the mountain peak. There was nobody there to see, but some security company put up some welcome signs inviting you to come in. I can’t read Cyrillic so I just assume that is what was written on the signs ;)

On my way walking around the place I had a serious Alice in Wonderland moment and found myself all of the sudden in the basement of the building, I would never unlawfully enter such a place. I was lucky I brought my Flashlight so I could right away start to search the place for a secure exit out of the rabbit hole. It was really amazing to wander around the basement of the place, there where a lot of small dark rooms and aisles and I was really, really happy that I don’t watch a lot of horror movies. I know why now :) After exploring the lower part I went to the main central room upstairs where all events where held. The rain dripping in from the holes in the roof and the fog creating a diffuse light turned this whole place into something close to a dystopic movie scene. All around the walls where mosaics of Lenin, Stalin or other communist symbols. I walked around quite some time in there and then made my way back out, in front of the building I ran into some guy that was looking for the Alice experience as well. I was glad to give him some help ;)

Up in the mountain range the weather kept being cold and rainy so I decided to head into Hisarya. It was recommended to me by another traveler because it features some antique Roman Buildings including the city wall that was still intact in many places. 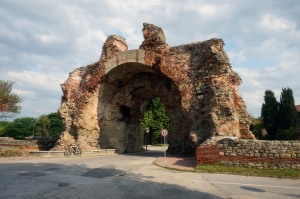 There are warm springs (40°) all over the town area and people were collecting the water there as if there would be no more tomorrow, complete delivery vans full of empty bottles. While I was there I found a small market in a side road. I bought 1kg Honey, 1kg selfmade jams, and fruit and vegetables for the next few days and ended up paying 9€

Next stop on my list was Plovdiv, highly recommended by everybody I met, so a must see before heading east to Turkey. I came to the city and found a parking place by the stadium, recommended by the Park4Night App that I`m using to find nice places to stay on this trip. I took my bike and went to explore the city as usual. In the tourist Info they told me there was a (free) city walking tour which I joined and I can only recommend to anybody visiting.

Just go to the tourist info for Information. After the tour I decided to have some Ice cream with one fellow traveler that I got talking too during the tour. While we were sitting and enjoying the ice cream our tourguide happened to walk by and we asked him for a place to have something to eat. It so happens that he was on his way to lunch so we all joined up and had lunch together which was a lot of fun. Being exhausted by the walking and the heat I went back to the car to chill for a while.

Upon returning to the car I saw that somebody else had already had the idea of chilling in my car and broke into it (During bright daylight!). The inside was a complete mess with all my clothes laying around. I then saw that they found my Laptop and monitor that I use for working while I`m on this trip. So even though I had nothing valuable lying out in sight, the car having a German license plate is apparently enough. The worst part of the whole theft was, that they stole my external backup harddrive, which I accidently took along on this trip and hadn’t sent home yet. Well, that was it for ALL pictures I made in the last 15 years! Gone Forever! Because they stole a 5 year old crappy Harddisk which is worth maybe 10€. If you don’t own much and have only things you really need, everything stolen is hurting you even more. So USB cables, Power Cords, Flashlight, etc are worth shit to the thief, but are a pain in the ass to get while being on a journey.

At first I thought if calling the police was even worth the trouble. But I went to the nearby bar and had someone call the police for me. They arrived about 45min later and my first impression was that I shouldn’t have bothered. While one guy was taking fingerprints of my car, the others asked me about soccer and the refugee situation in Germany. At the police station they filed my report, not needing details, just writing Acer 13” Laptop, 3 Harddisks, etc. yes, descriptions this precise are sure to find the stolen things… I was told to come back the next day to collect the official report. That night I used my phone to change all passwords, since they are stored on the stolen laptop! The next day I returned to the police station and was told the report is not ready yet and I had to come back later in the afternoon. Getting a little annoyed by the whole thing I was in no mood to really explore the city any further but just waited for the time to pass. Upon my return they I was told that they were able to catch the thief because of the fingerprints they took from my car. That was a surprise and totally unexpected! So they said they have him in custody and they get my stolen things back. I just had to come back the next day. Uplifted by the fast and efficient work I returned the next morning to be informed that the thief is refusing to say anything and that they can only hold him for 24h, while his buddy was probably out on the blackmarket selling my stuff. So they just gave me a report, asked for my contact info and told me the chances are second to none that I`ll get anything back. With my mood really at a low I left the town and headed for the mountains in the south west of Bulgaria to have some solitude. It made me really sad to be left with such a bad impression of the country after everyone else was so nice and friendly before.

While being in the city waiting for the police work I decided to continue further to the west all the way to Albania before turning around and start heading for Turkey in the east again. So next was going to be a short layover in Macedonia and then Albania where I was going to meetup with a travelbuddy again.

The next post will be all about too high expectations, pleasant surprises and is going to be quite hot.

One thought on “Bulgaria II”